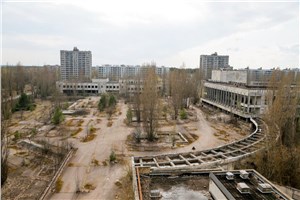 When nuclear power was first commercialized in the mid-1950s, many viewed it as an ideal solution for the electricity needs of a growing global population. One pound of uranium-235 can produce two to three million times as much electricity as one pound of coal or oil – but without producing any direct atmospheric emissions under normal operations.

But then a couple of accidents in the 1970s and 1980s seriously damaged enthusiasm for nuclear power. The Three Mile Island accident in Pennsylvania in 1979 remains the most serious nuclear power accident in U.S. history. There weren't any injuries as a result of this accident, but there was a small release of radioactive material during the incident.

Radiation Fears
One thing I have observed over the years is that people have a high degree of fear when it comes to radiation. You can explain to someone that a banana (like our own bodies) is naturally radioactive and they will still eat it, but "radioactive release from a nuclear power plant" strikes terror in many.

As an aside, I have explained the cancer risk from radiation with an analogy. It is technically possible to develop cancer from being exposed to a single dose of radiation. Radiation can interact with the DNA in our bodies to cause it to malfunction and eventually lead to cancer.

But the analogy I use is that it's like trying to shoot a power line (which represents DNA in this analogy) from a mile away with a high-powered rifle. The chance of hitting it is miniscule, but the more times you fire, the better chance you have of hitting it. Increase the number of people firing and the rate at which they fire, and the overall chance of a hit becomes a lot higher.

In any case, many people have an irrational fear of radiation. They can't see it, but they know it could possibly cause cancer. We just aren't very good at evaluating those odds versus all sorts of much riskier activities we engage in every day.

Chernobyl Changes Everything
The Three Mile Island accident was a minor event compared to what was to come next.

Last week HBO debuted a new miniseries covering the events surrounding the 1986 Chernobyl nuclear disaster. Based on the first episode, it will provide a captivating, dramatic overview of what happened. Nothing like this had ever been seen in the nuclear power industry, and many would have argued that an accident of this scale was impossible.

As an engineer in the energy industry, a major focus of mine has always been on safety during all phases of design, construction, and operation. Thus, I have spent a lot of time reviewing what went wrong during major disasters like Chernobyl, the 2010 Deepwater Horizon oil spill in the Gulf of Mexico, or the 2011 Fukushima Daiichi nuclear disaster in Japan.

Inevitably, in every disaster we find design flaws and warning signs that should have been obvious. I am not sure how much the HBO series will delve into the events leading up to the accident, but it was actually the result of a safety test that should have been terminated as soon as things started to go wrong. The series does show that as it started to become clear what had happened, many were in absolute denial that the outcome (an explosion of the nuclear reactor itself) was even possible.

From an engineer’s perspective, it is important to recognize both risk and the consequences of risk. In both the Chernobyl and Fukushima nuclear accidents, risks weren’t recognized and consequences weren’t properly estimated. As a result, a larger segment of the public has developed a great fear of nuclear power.

It is not going to be easy to overcome this fear and change attitudes about nuclear power.

I believe that nuclear power has an important role to play as a reliable source of firm, low-carbon power. This is important to help complement intermittent renewables like wind and solar power. But there are two major issues that must be dealt with: Assuring the safety of the public, and adequately dealing with nuclear waste. Here I will only address the former.

Nuclear power plants must be designed to be fail-safe, if not fail-proof. To be fail-safe means that if an accident does take place, the system goes to a safe state. A simple example of this is an electrical fuse. If too much current tries to flow across the fuse, it melts and stops the flow of electricity. Neither Chernobyl nor Fukushima were fail-safe designs. Future nuclear plants must be designed in a way that provides the public with an absolute degree of confidence that the designs are fail-safe.

Public expectation may be that nuclear designs need to be fail-proof, but there are many reasons why that metric will never be achieved. The most fundamental reason is that we simply can’t guard against every possible outcome. Thus, we try to mitigate possible consequences, and implement fail-safe designs.

Conclusions
If the fail-safe metric can be met, it is still going to be a tough sell to a skeptical public. The reality is that nuclear power is a very low risk way to produce power. But the potential consequences of an accident can be extremely high, as we saw when entire cities were permanently evacuated in the aftermath of Chernobyl and Fukushima. Those images will be hard to overcome, but if the nuclear power industry is to regain momentum the public will have to be convinced that there is zero chance of another major release from a nuclear power plant.