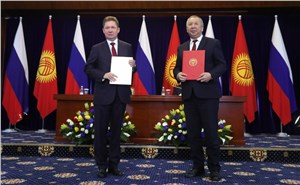 Alexey Miller, Chairman of the Company’s Management Committee, and Kubatbek Boronov, First Deputy Prime Minister of the Kyrgyz Republic, signed today in Bishkek the Roadmap on the participation of Gazprom in the acquisition of the property and assets of Kyrgyzneftegaz.

The roadmap outlines the mutual obligations of the parties and a plan for further actions. In particular, it is planned to carry out an evaluation of the company and prepare a financial feasibility assessment of the deal.

Another focus of the meeting was cooperation in the NGV sector. It was stressed that the wider use of natural gas as a vehicle fuel could improve environmental conditions in the Kyrgyz Republic.

Tell a friend:
Roadmap Signed On gazprom's Participation In acquisition Of kyrgyzneftegaz Property and Assets