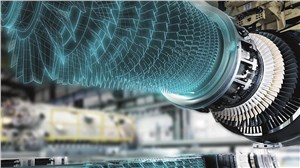 Siemens and the Scottish energy company SSE plc have announced they will collaborate to build the highly efficient gas-fired power station Keadby 2 in Lincolnshire. Siemens will provide a full turnkey solution for the power plant, which will include the world's first deployment of the 50Hertz version of its SGT-9000HL gas turbine. SSE will invest £350 million in the construction of the new power station which will have a total capacity of 840 megawatts (MW) and 63 percent efficiency. Also included is a 15-year long-term service contract, the first long-term program (LTP) for an HL-class gas turbine in Europe. Siemens will utilize its advanced digital service solutions, including remote monitoring and diagnostics, to help maintain the availability, reliability and optimal performance of the power plant.

Construction at the site will begin this summer to deliver what will be the second SSE combined cycle power station located at Keadby. The decision to build Keadby 2 continues without SSE securing a capacity contract in the 2018 Capacity Auction, testament to the company's commitment to the project and trust in the technology Siemens can deliver. Commercial operation of Keadby 2 is scheduled for 2022 as coal power plant closures come into effect. It will provide flexible large-scale power generation to the UK grid.

"Siemens has a long-standing relationship with SSE and we have worked together to develop a competitive and innovative solution to enable our customer to progress with this important project," said Willi Meixner, CEO of the Siemens Division Power and Gas. "In June 2017, we announced to validate the technologies of our new HL-class for the 60-Hertz market at Duke Energy's Lincoln County site in North Carolina in the United States. Now the cooperation with SSE for the 50-Hertz version of our HL-class is another milestone in our roadmap to further drive leading performance of gas-fired power generation," added Meixner, CEO of Siemens Power and Gas Division.

Martin Pibworth, SSE's Wholesale Director, said: "SSE is very pleased to have this unique opportunity now to be partner with Siemens to build a new state-of-the-art gas-fired power station at Keadby 2. Its highly efficient technology, not previously seen in the UK, will provide firm, reliable power from the early 2020s at half the carbon emissions of the coal generation it is replacing. New CCGT complements SSE's ambitions to develop more offshore and onshore wind as CCGTs remain well-placed to provide flexible, grid-scale back up to complement the large volumes of renewables the UK needs to meet its low carbon targets."

Siemens developed the HL-class in an evolutionary step derived from its proven H-class technology. The advanced Siemens HL-class gas turbines combine a series of new but already tested technologies and design features with the best of past experience – resulting in a technology carrier to the next level of efficiency and performance. The HL-class is clearing the way to higher efficiency levels.

Tell a friend:
Siemens Will Deliver One of the World's Most Efficient Combined Cycle Power Plants to UK