Njord A towed to Kvaerner Stord 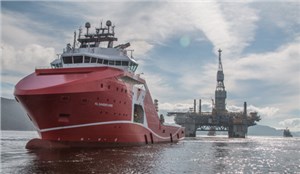 The Njord A platform arrived at Kværner Stord on Thursday 25 August. The platform will now be reinforced and renovated for production beyond 2030.

Oil and gas production on Njord should in fact have ceased a long time ago. When the field was developed, it was scheduled for production until 2013.

“We have been able to recover more of the reserves than originally expected, and following new discoveries and the Snilehorn development, field production will continue for at least ten more years. This is a big and important project and Statoil is working closely with the partners and suppliers to succeed,” says Snorre Grande, project director for the Njord Future project.

The commercial basis for the Njord A renovation still requires production from Njord and Hyme, where we have identified 177 million barrels of oil equivalent (boe) remaining to be produced.

Scheduled for tie-in to Njord, the Snilehorn discovery contains 66 million barrels. These two fields combined will provide more recoverable resources than the Gina Krog field, which is currently under development on the Norwegian continental shelf.

To enable Njord A to receive these resources, the hull must first of all be reinforced. Extensive renovation on board the platform will also be made.

Tell a friend:
Njord A towed to Kvaerner Stord