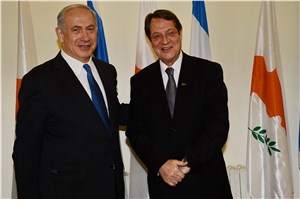 The President of the Republic of Cyprus, Nicos Anastasiades, and Eni’s  Chief Executive Officer, Claudio Descalzi, met today in Nicosia to discuss Eni's current activities in the country and the potential for future projects.

Descalzi briefed President Anastasiades on the latest developments of hydrocarbon exploration activities in the Mediterranean Basin and stated that Eni remains committed to Cyprus and the eastern Mediterranean and will continue to work with the Government of the Republic of Cyprus to develop the Country's energy potential.
Among the topics discussed during the meeting were the evolution of the energy and geopolitical scenarios that the gas discovery made off Egypt will bring throughout the area and the role that Cyprus, due to its energy potential, will play in the near future.

Eni believes in the significant synergies of joint development in the entire area of the eastern Mediterranean. This area could be of crucial strategic importance as a gas hub for the whole region and also makes an important contribution to European energy security.