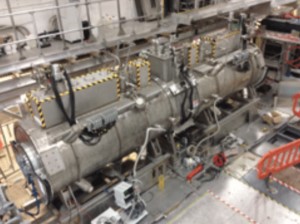 The international Muon Ionization Cooling Experiment (MICE) collaboration, a U.K.-based effort that includes researchers at the U.S. Department of Energy’s Lawrence Berkeley National Laboratory (Berkeley Lab), has made a major step forward in the quest to create an accelerator for subatomic particles called muons.

For the first time, scientists have achieved a process known as muon ionization cooling. This represents a major step toward being able to collide muons in a next-generation collider that could give us a better understanding of the fundamental constituents of matter. Such a future collider would provide at least a 10-fold increase in energy for the creation of new particles compared to the current world leader: the Large Hadron Collider (LHC) at CERN in Europe.

Until now, the question has been whether you can channel enough muons into a small enough volume to be able to study physics in new, unexplored systems. Muons are in the same class as electrons, but with a mass that is about 200 times larger.

The results of the experiment, carried out using the MICE muon beamline at the Science and Technology Facilities Council (STFC) ISIS Neutron and Muon Beam facility in the U.K., clearly show that ionization cooling works and can be used to channel muons into a tiny volume.

Muons can also be used as a catalyst for nuclear fusion, and to see through really dense materials that stop X-rays. Researchers hope that the new technique can help produce high-quality muon beams for these applications, too.

“This was an extremely difficult achievement, and crucial to the dream of a muon collider,” said Derun Li, head of the Berkeley Accelerator Controls and Instrumentation Center in Berkeley Lab’s Accelerator Technology and Applied Physics Division.

As manager of Berkeley Lab’s role in the overall Muon Accelerator Program, Li was responsible for the delivery of the Lab’s main contribution: two superconducting spectrometer solenoids. These components, which Berkeley Lab researchers designed, built, and delivered, are magnetic coils that measure a property of the muon beam known as emittance (a measure of the orderliness or “coolness”) before and after the cooling channel.

“Muons combine many of the best advantages of electrons and protons for collider-based particle physics, but also introduce technical challenges,” Li added. Organizing particle beams into bunches that are both tightly packed and orderly, or “cool,” is key to getting the most particle interactions, and therefore the most data, in modern colliders.

Rapid cooling is essential because, unlike the long-lived particles such as electrons or protons that are commonly used in colliders, muons last only a few microseconds.

Since the start of this effort in the early 2000s, Berkeley Lab has been instrumental. The late Berkeley Lab accelerator physicist Michael S. Zisman had championed the push toward future muon colliders, leading the Neutrino Factory and Muon Collider Collaboration and serving as a deputy spokesperson for MICE.

I noted many important contributions from Berkeley Lab researchers during its 15 years of involvement in the MICE project, including key roles in engineering, magnetics, and cryogenics.

“The enthusiasm, dedication, and hard work of the international collaboration and the outstanding support of laboratory personnel at STFC and from institutes across the world have made this game-changing breakthrough possible,” said MICE spokesperson Ken Long, a professor at Imperial College London.

Chris Rogers, a physics coordinator for the collaboration who is based at the ISIS Neutron and Muon Beam facility, explained, “MICE has demonstrated a completely new way of squeezing a particle beam into a smaller volume. This technique is necessary for making a successful muon collider, which could outperform even the LHC.”

Muons are produced by smashing a beam of protons into a target. The muons can then be separated off from the debris created at the target and directed through a series of magnetic lenses. Because of this rough-and-ready production mechanism, these muons form a diffuse cloud, so when it comes to colliding the muons, the chances of them hitting each other and producing interesting physical phenomena is really low.

To make the cloud less diffuse, researchers use a process called beam cooling. This involves getting the muons closer together (even though, having the same electric charge, they repel each other) and moving in the same direction. Magnetic lenses can do either of these things, but not both at the same time.

A major obstacle to cooling a muon beam is that muons only live for 2 millionths of a second, but previous methods developed to cool beams take hours to achieve an effect. In the 1970s a new method, called ionization cooling, had been suggested. The concept was further developed in the 1990s, but testing this idea in practice remained formidable.

Tell a friend:
a Breakthrough on the Next Big Step to Building the World's Most Powerful Particle Accelerator