Committed to Donating Time and Money to Charitable Causes, the Sustainable Energy Company Starts the Year With Sponsoring and Volunteering at Multiple Ice Houses. 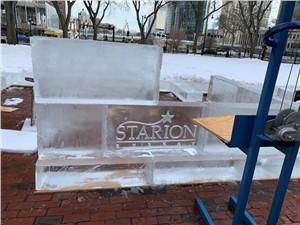 Starion Energy is a competitive energy supplier headquartered in Connecticut, which operates in 10 states and the District of Columbia, to provide smarter, cleaner energy choices, and take active interests in communities it serves. This year, in celebration of its 10 years in business, the sustainable energy company is planning numerous charitable works and will be visiting organizations throughout 10 states and the District of Columbia during the next three to six months to determine how it can sponsor or volunteer or help worthy causes related to energy.

Charitable contributions have numerous benefits, but the most important reason is obvious: responsible corporations should give back to their community in effort to make a real impact.   Rather than consumers relying on default energy supply from traditional energy generation, Starion Energy believes energy choice provides options for consumers to select environmentally superior sources and to give back and support to the local communities Starion Energy serves.

"Over the next several months, we will be visiting organizations to find out how we can help. We are honored to be a sponsor for three Ice House events in the month of January that provide financial assistance to people in need of home heating," said Duane Gereski, Director of Marketing.   In addition to a financial sponsorship, Starion Energy employees donated their time to volunteer at the events.

Starion Energy made a sponsorship donation of a $1,000 to Operation HON Ice House in Baltimore, Maryland, which occurred January 10th-11th, 2020. The Ice House event, which was organized by Fuel Fund of Maryland, raised awareness of community member's needs during the chilly months of winter. A house constructed entirely out of hand-carved ice blocks and ice furnishings welcomed the public to experience just a small glimpse of what it is like to suffer through cold winter months without heat or electricity. Donations were collected, which are used to provide financial aid to those who cannot afford their electric bills.

While attending Operation HON Ice House, representatives from Starion Energy were able to meet with Debbie Brown, Chief Development Officer of MD Fuel Fund. They were also able to volunteer for the 3 day event over the weekend by talking to guests, spreading awareness, and collecting donations for the cause.

"We find real meaning and reward by serving a higher purpose that aligns our organizational values," said Pete Muzsi, Sales Director at Starion Energy. "We at Starion are committed to giving back and helping people in the markets we serve. The Maryland Fuel Fund's efforts are a great match for us and they make a significant impact on individual lives."

On January 17th and 18th, 75 partners and sponsors (including Starion Energy) helped to make the 3rd Annual WAFF Ice House in Washington D.C. a tremendous success on every level by raising more than $176,000 which will keep nearly 300 additional families warm this winter.  Every winter people in the D.C. area community face the difficult question of whether to give up heat in their homes to deal with temporary financial crises brought on by an illness, accident or job loss. Since 1983, WAFF has distributed nearly $29 million to help 300,000 local homes keep their heat on while they get back on their feet.