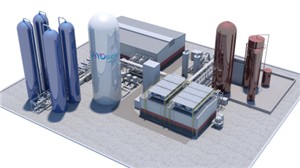 Highview Power, a global leader in long-duration energy storage solutions, today announced plans to construct the UK’s first commercial cryogenic energy storage facility (also referred to as liquid air) at large scale, which will be located at a decommissioned thermal power station in North of England. The 50 MW/250 MWh project is a clean large-scale energy storage facility that can help the UK achieve its goal of decarbonising industry, power, heat, and transport. The project being developed was announced by Highview Power CEO Javier Cavada during remarks at the BloombergNEF (BNEF) summit in London.

Along with this first large-scale facility, Highview Power is developing a portfolio of projects in the UK and is in the process of securing sites. These projects will further the UK’s strong move towards its clean energy goals and help it meet the expected global demand for energy storage.

“We are excited to begin working on our first commercial UK project at scale to become the largest battery storage system in Europe and support the National Grid. This CRYOBattery™ plant will provide the critical services needed to help maintain a stable and reliable grid,” said Cavada. “Long-duration, giga-scale energy storage is the necessary foundation to enable baseload renewable energy and will be key to a 100% carbon free future.”

In addition to supplying energy storage, Highview Power’s facility will also provide valuable services to the National Grid to help integrate renewables, stabilise the electrical grid, and ensure future energy security. Other services the facility could deliver include market arbitrage, frequency management, reserve, and grid constraint management services. Highview Power is currently in discussions with potential offtakers to contract for the capabilities and services the facility can provide.

Energy storage installations around the world will multiply exponentially, reaching 1,095GW/2,850GWh by 2040. Over the next two decades, $662 billion of investment will be needed for stationary energy storage, according to BNEF.

Highview Power’s CRYOBattery™ uses only benign materials with zero emissions and has zero water impact. The new facility in the North of England is the first large scale commercial system utilizing this technology, pioneered at Highview Power’s pilot plant in Slough, and evolved at the demonstration plant in Pilsworth, Greater Manchester, which has been successfully operating since early 2018.

Highview Power’s CRYOBattery™ is the only freely locatable energy storage solution on the market today that delivers clean, reliable, and cost-efficient long-duration energy storage with grid synchronous inertia. It can store energy for weeks, instead of hours or days, and at approximately £110/MWh for a 10-hour, 200 MW / 2 GWh system, the CRYOBattery™ offers the lowest levelized cost of storage for large-scale applications.