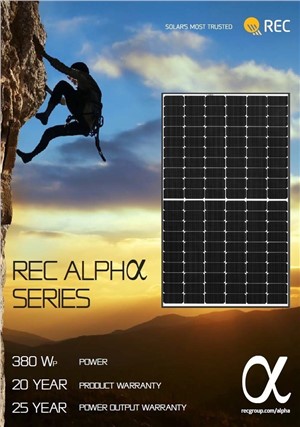 REC Group, an international pioneering solar energy company with a Scandinavian heritage, is thrilled to announce today's mass production start of the REC Alpha Series solar panel in Singapore. To produce the REC Alpha Series, REC has invested a total of 150 million USD into the site and developed a new Industry 4.0 cell fab. This amounts to an additional 600 MW of heterojunction (HJT) cell and module capacity, bringing REC Group's total module capacity in Singapore to 1.8 GW annually.

REC's CEO Steve O'Neil states: "Our dedicated goal is to empower consumers. And we know that only with big leaps, the global energy transition can thrive. Alpha is a crucial tool for homeowners to do exactly this and gain energy autonomy." REC's Chief Technology Officer Shankar G. Sridhara adds that "It is a bold move jumping to HJT, and it is also very bold to do 600 MW in one shot – but being bold and innovative is in REC's DNA."

The REC Alpha Series was initially launched at Intersolar Europe on May 15, 2019 and presented to a wide audience at further major industry events in the U.S., Japan and India. First rooftop systems from initial production volumes have already been installed in Italy, the Netherlands, US, Australia, New Zealand and Japan. For homeowners, Alpha is the perfect rooftop module to drastically reduce their electricity bill and lead the shift towards a cleaner future by going solar with the latest technology.

Utilizing most advanced commercialized technology, the REC Alpha Series is the world's most powerful 60-cell solar panel, delivering up to 380 watt-peak (Wp); this translates to a leading power density of 217 W/m², providing 20% more power than conventional panels in the same area. Alpha performs perfectly in both, cold and hot climate conditions, and comes with a super-strong frame, suitable to withstand even the most severe weather. The increased power and efficiency performance is backed by REC's industry-leading 25-year performance warranty, guaranteeing 92% of nameplate power after 25 years. Finally, the REC Alpha cells are 100% lead-free and the REC Alpha Black variant is designed to please the most demanding customers looking for best aesthetics: uniform, full black color, and practically invisible cell connections.

Tell a friend:
REC Group Kicks Off Mass Production of Its Ground-breaking Alpha Module in Singapore