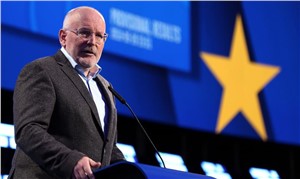 He may have lost his bid to become the EU's next president, but Frans Timmermans has today been given a task that's no less challenging: implementing the European Green Deal, a package of policies largely based on that proposed by Democrats in the U.S., designed to reach a goal of an emissions-free EU by 2050.

The Dutch Socialist is a heavy-hitter in EU politics, and has already served as the European Commission's vice president under outgoing President Jean-Claude Juncker. The new president, Ursula Von Der Leyen, will take office on November 1. Today she unveiled her portfolio assignments for her cabinet of 26 commissioners - one from each EU member state except Britain, which has opted not to put forward a nominee because it is scheduled to leave the bloc on October 31.

"The European Green Deal should become Europe’s hallmark, at the heart of it is our commitment to becoming the world’s first climate-neutral continent," President Von der Leyen wrote to Timmermans in his mission letter. "It will require collective ambition, political leadership and a just transition for the most affected."

Simson is a liberal and, given the country she comes from, is expected to focus largely on European energy security and independence from Russian gas. This could be bad news for the controversial Nord Stream 2 pipeline being constructed between Russia and Germany - though it's unclear what effect the energy commissioner could have on the project given 75% of the pipes have already been laid.

Sinkevicius is a member of his country's Farmers and Greens Union which, despite its name, is conservative. Though his party sits with the Green grouping in the European Parliament, the European Green Party doesn't consider him a member, and his politics are widely unknown. Reports that he keeps a Make America Great Again hat in his office have raised eyebrows in Brussels, though he says the hat was a gift and "not reflective of my political views". At 28, he will be the youngest European commissioner in history.

It has not gone unnoticed that Timmermans' team is entirely Eastern European, which may present a challenge or an opportunity. Eastern European countries, concerned about measures that might inhibit their economic growth after decades of being constrained by Communism, remain the biggest obstacle to EU progress on fighting climate change. Poland is still leading an Eastern bloc of countries in vetoing an attempt to set a target of decarbonizing the EU by 2050.

Timmermans has his own problems with these Eastern governments unrelated to climate. During the past five years he was put in charge of instigating rue-of-law violation investigations against Poland and Hungary, and he remains a figure of extreme vilification in both countries.

The key challenge for the new green deal vice president will be to win over Europeans in the east who are far less convinced of the need to take climate action than their counterparts in the east. If he can succeed, it will be no small feat.

Tell a friend:
The Green New Deal Has Been Handed To The EU's Vice President