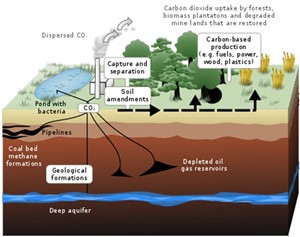 The ever-growing concerns about permanent climate change culminated in the Paris Climate Summit in 2015, around 4 years ago. 187 countries were present and certain measures were put in place to combat climate change. In practice, the way to go about this is to curb the carbon dioxide and greenhouse gas (GHG) emissions but the world is still heavily reliant on fossil fuels for energy. This is why CCS has been put forward as a viable option to help combat climate change. This is because the technology does not require investment in completely alternative energy sources as CO2 emissions can be captured at the source with a high level of efficiency. The other major driver for CCS is its use for CO2 EOR. The market however, is still immature globally but with pressure to meet emissions targets manifesting as tighter regulations and policies, the CCS market will grow worldwide.

The report analyst commented "So far, little has actually been achieved in terms of carbon emissions reductions. Some investment by various countries into low net carbon energy sources (wind, solar) has actually increased their total carbon emissions (most notably Germany). There have been a fair few test runs for carbon capture and storage across the world, and countries seemed fairly reluctant to sue this technology, but are now beginning to invest further into this. Carbon capture and storage can be used as a steppingstone technology to help severely reduce emissions while simultaneously maintaining and increasing jobs until we reach a stage where a legitimate, cheap and bountiful source of low carbon energy can be found."