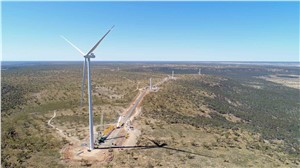 There is growing confusion over the status of Windlab’s world-leading wind-solar-battery energy hub at Kennedy in north Queensland.

On Thursday, in a note to its Electricity Statement of Opportunities, the Australian Energy Market Operator said the anticipated commissioning of the Kennedy energy hub had been delayed by nearly two years from August, 2019, to July, 2021.

This was news to Windlab, which still expects the already delayed project to be in full commercial operation by the end of this year.

“Windlab will advise AEMO that it considers their assumptions to be too conservative.”

It added that it had been generating electricity  since mid August, and was operating under a 5MW export limit. All wind and solar farms have to go through various limited “hold points” to prove their equipment is working properly.

The Kennedy energy hub – combining 43MW of wind, 15MW of solar and a 4MW/4MWh Tesla battery – is a first of its kind project for a main grid, although similar projects have been announced since.

Windlab completed the building of the project late last year, but had to wait eight months before it was connected to the grid.

The reasons for the delay are not clear. It is one of a number of projects suffering such delays, often caused by strict new connection standards, lack of grid capacity, the need for new equipment and/or the shortage of resources from networks and the market operator. Kennedy had already been required to add a synchronous condenser and a statcom to the project.

Earlier, an AEMO spokesman said in an emailed statement after RenewEconomy asked about the delay:

“In line with our published methodology for producing Reliability Forecasts under the RRO (retailer reliability obligation), we have excluded the possible contribution from Kennedy Energy Park for the first summer due to uncertainty on whether they will be able to generate consistently in the short-term.

“As system security is our highest priority, we need to ensure that any outstanding stability, compliance and model issues are resolved before registration and commissioning.”