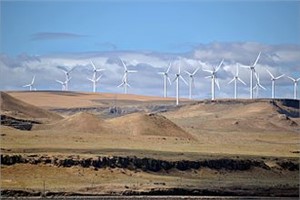 "We are excited to have received the PUC's unanimous approval for the state construction permits for the Sweetland wind farm," said Michael Rucker, CEO and founder of Scout Clean Energy. "The approval means Scout now can take the power to market and begin planning for construction as early as 2020."

Sweetland Wind Farm filed its application with the PUC in March and a public input meeting was held in Miller in April. Prior to receiving PUC Commission approval, the project worked extensively with PUC Staff, the local community and stakeholders to ensure all concerns were addressed.  The Permit that was granted reflects all parties working together to reach a favorable outcome for the project, stakeholders and South Dakotans. Scout now turns their attention to marketing the power.

"We are very fortunate to have a 200 MW project fully permitted in South Dakota. The project's top tier wind resource and strategic location in the Southwest Power Pool make it attractive for potential investors looking to expand their renewable energy footprint in the region," explained Rucker. "We have already had significant interest in the project and are working toward completing a power purchase agreement."

The project will result in 200 temporary construction jobs and 10 permanent full-time positions once the facility begins operation. The community economic benefits are estimated to generate $35 million dollars in tax revenue over the life of the project, generating a little over one million dollars a year in new tax revenues.

"The planned $240-million-dollar facility represents a significant investment in South Dakota and several communities in Hand County. Sweetland is an important catalyst for Scout and paves the way for several additional Scout wind projects that are nearing financial close and which are scheduled to commence construction over the coming months," explained Michael Rucker.

Scout is a portfolio company of Quinbrook Infrastructure Partners (Quinbrook), a global investment manager specializing in lower carbon and renewable energy infrastructure assets. The construction will be managed by Scout Clean Energy and anticipated to be completed as early as the end of 2020.

"We are delighted to see Sweetland wind farm received its principal permit. Sweetland is an outstanding wind project located in a very robust wind regime," said David Scaysbrook of Quinbrook and Chairman of Scout's Board of Directors. "This is another important milestone for Scout, which continues building its diverse and growing wind power portfolio which has expanded to over 2.3GW in 10 states."