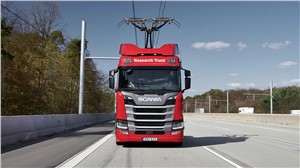 Take overhead power lines, similar to those in operation with railways, install the whole thing above the right lane of a motorway – the eHighway is ready. The bridging technology is already making electromobility possible for road-transported freight.

And this is how it works: A truck drives onto the right-hand lane, directly under the overhead power lines. A sensor in the vehicle detects the lines and emits a signal. The driver then presses a button – and a pantograph rises up above the roof of the cab, connecting to the overhead lines. Within seconds, the cab becomes almost completely silent: the combustion engine stops, and the electric motor begins powering the truck. A future scenario? No, reality now.

Just a few years ago, the idea that electric long-distance trucks and cars could coexist on ordinary motorways was a bold vision. Today, however, several projects are underway in Europe to test and evaluate this technology.

One of these test sections is located on the A5 highway between Frankfurt and Darmstadt. Over a total distance of ten kilometers, up to the year 2022 research is to be carried out into whether such overhead power line trucks could be a viable alternative to road freight transport. The German Federal Ministry for the Environment is supporting the field test called Elisa – short for: electrified, innovative heavy traffic on the Autobahn – with almost 15 million euros. In addition, there are two further highway test sections in Baden-Württemberg and Schleswig-Holstein.

Governments and authorities in both Italy and Sweden are also pushing ahead with their own research projects. The long-term goal is to develop an electrification infrastructure that could cover certain busy routes between logistics hubs or even parts of the European motorway network.  The German Ministry for the Environment assumes that the electrification of heavy goods vehicles could become increasingly attractive for the logistics sector in the near future.

Within this field of research Scania is clearly the industry leader.  The brand is supplying a total of 15 hybrid R 450 trucks for the field tests, and Siemens has developed the pantographs on the roof. In addition to supplying trucks, Scania is also responsible for vehicle maintenance and data gathering from the tests.

Scania’s Executive Vice President for Research and Development, Claes Erixon sees overhead contact line roads as one of several promising technologies that can help freight transport on roads to a sustainable future. The company, like its sister brands MAN Truck & Bus, is also pursuing other, more direct ways to make traffic as green as possible.

“Vehicle electrification is developing quickly and with its environmental, social and cost benefits, it will play an important role in the shift to a fossil-free transport system,” he says. The eHighway could be an interesting option if it is used throughout Europe, but this requires an EU-wide infrastructure.