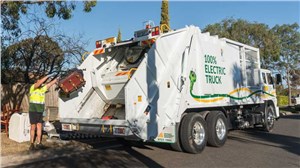 The first fully electric rubbish trucks to hit the streets in Australia have done so this week in Melbourne’s outer south east council, the City of Casey.

The 100% electric rubbish trucks, which have been developed by waste collection equipment maker SuperiorPak in collaboration with La Trobe-based electric truckmaker SEA Electric, will do the rounds in the streets of Casey, and are the first such trucks to be designed and made in Australia.

According to WM Waste Management Service‘s managing director Mark Jeffs, the electric hard waste collection trucks are a “triple win” for Casey: they are cleaner, cheaper and quieter than their diesel predecessors.

“Obviously electric trucks are a key demonstration of our support for renewable energy as they significantly reduce our environmental footprint and improve the sustainability of residential hard waste collection,” Jeffs said in a note by email.

“But the equal winners here are ratepayers in Casey as the trucks will leave them with cleaner air; they are much quieter than diesel or petrol vehicles and they will reduce annual fuel and running costs as they are require less maintenance and last longer than normal trucks.

“It might mean a few extra minutes of shut-eye for residents who are usually woken by the roar of a rubbish truck doing its rounds,” said Jeffs.

The choice to go electric by WM, which was also the first in the country to put hybrid diesel/electric trucks into service, demonstrates the company’s commitment to sustainability and the company hopes it will mark it as a leader in the waste collection industry.

“I am proud to bring electric trucks to the streets of Melbourne and I congratulate the City of Casey on this significant commitment,” said Jeffs.

For the City of Casey, Mayor Amanda Stapledon says making the choice to go electric is a boon for residents.

“This is a terrific breakthrough in technology that will mean locals have a more sustainable hard waste collection with less noise, making their streets more liveable,” she said in a note by email.