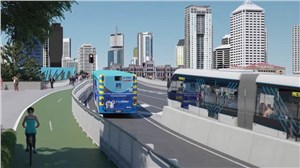 People living in Queensland’s capital could soon be ferried about the city through dedicated transport corridors on zero emissions, electric buses.

The Brisbane Metro, which forms a primary part of Brisbane City Council’s strategy to provide its residents with quick, safe and clean transport options, is currently undergoing a procurement process to decide which organisation will fulfill the design and delivery of the Metro fleet – including what kind of powertrains will be used.

Brisbane City Council deputy mayor Adrian Schrinner has said that in addition to traditional powertrains, designs that have been submitted for the bi-articulated buses to service the Metro include hybrid and fully electric options.

The companies that have submitted to the tender are Daimler Truck and Bus Australia Pacific Pty Ltd, HESS AG (from Switzerland) and the Transit Australia Group together with Van Hool of Belgium.

“So, there are three different options on the table at the moment.

“We are looking at everything from fully electric through to more traditional power trains. That includes hybrid power trains as well.”

Speaking with Brisbane Times last week, Brisbane’s deputy mayor Adrian Schrinner said the decision of which kind of bus will service the Metro will be made by mid-2019.

The winner of the tender will provide 60 vehicles to the Metro in total, after first trialling one vehicle to ensure its suitability.

In light of the possibility of an electric fleet, the council wants to make sure its Rochedale depot is set up to handle future growth as well as the needs of charging such a fleet.

“We want to make sure that the new [Rochedale] depot is set up to accommodate the future charging requirements for a future electric fleet as well.”

“We are planning for up to 90 vehicles down the track,” he said.

“We need room to grow as Metro expands. We are already looking at the opportunities for the state government’s busway to be expanded down to Springwood as well.”

“So this depot needs to be future-proof. It must be ready to expand as Metro expands.”

That vision to prepare for the future does not seem to be shared, however, in Western Australia, where the state government only last week announced a $550 million “investment” in 900 diesel buses from Volvo and Volgren.

While on the one hand issuing a new bill that will see people fined $1000 for smoking outside public establishments such as pubs, shops, hospitals or airports, the WA government has failed to recognise the equally, if not worse, health risks associated with particulate and NOx pollution emissions from diesel-fuelled transport.

“Whilst many parts of the civilised world are moving away from diesel in city and suburban areas (due to health and financial reasons) our state government are locking in a minimum of 10 more years of diesel pollution,” wrote Rob Dean, member of Tesla Owners Club Western Australia in a note to The Driven.

With an illuminating report from the World Health Organisation in October 2018 drawing a direct link between air pollution and a whole range of respiratory-related disease that results in the death of 1 in 5 children globally, the WA government’s decision to purchase 900 diesel buses is at a minimum, extremely concerning.

“It appears as if the WA state cabinet haven’t thought this through at all, or at the very least there is no communication between the transport minister and the health minister,” writes Dean.

Professor Ray Wills, Future Smart Strategies spoke with ABC Drive last week on the topic, and noted that the issue of particulate pollution from diesel buses is particularly harmful especially given the proximity that passengers stand to buses when waiting at busy bus stops.

“We really need to be thinking about how we can better address this issue and there are solutions to hand,” said Wills.

“The world has moved on in terms of the way we measure these particulates and the way we develop tech to try and save the problem,” he said.

He points out that questions of reliability of electric buses are really not a concern in 2019.

“China has just short of 1 million buses on the road…almost half of those now are in fact electric.”

While some may argue that plugging into the grid still means electric buses are polluters, Wills notes that they still pollute less than their fossil-fuelled counterparts, and have the benefit of transporting large numbers of people thus removing more pollution from the city by reducing the number of private vehicles on the road.

“We could really improve city air quality by moving to electric,” he says.