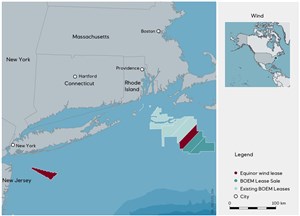 Equinor has been declared the provisional winner of one of the three leases offered in the US government’s wind lease sale for an area offshore the Commonwealth of Massachusetts.

Equinor submitted a winning bid of USD 135 million for lease OCS-A 0520, during the online offshore wind auction concluded today by the US Department of the Interior's Bureau of Ocean Energy Management (BOEM).

Equinor will now have the opportunity to explore the potential development of offshore wind farms to provide the region with a significant, long-term source of renewable electricity.

“We are excited to have secured this attractive opportunity, Equinor’s second offshore wind lease in the United States. This acquisition complements our existing position on the US East Coast and gives us a foothold to engage in the Massachusetts and wider New England market, a region notable for its strong commitment to offshore wind,” says Christer af Geijerstam, president of Equinor Wind US.

A stronghold on the US East coast
The new lease located south of Massachusetts and east of New York gives Equinor a strong strategic position. The company now holds leases within reach of some of the most important markets for offshore wind in the US. Equinor firmly believes in the long-term regional potential for offshore wind as a major local source of renewable, reliable and cost-effective energy.

This new lease is part of Equinor’s commitment to taking a leadership position in renewable energy development in the US. In December 2016, Equinor won the federal lease auction of 80,000 acres south of New York and east of New Jersey. Equinor is currently developing projects in that lease area for the offshore-wind markets in both states; Empire Wind in New York and Boardwalk Wind in New Jersey. In total, Equinor’s US offshore wind portfolio now has the potential to power more than two million homes with, renewable power.

“The US northeast presents Equinor with the near-term potential to build a second industrial offshore wind hub for the company, adding to our existing position in the United Kingdom,” Pål Eitrheim, Equinor’s executive vice president for New Energy Solutions, said.

Equinor is building a material position in renewable energy and evolving into a broad energy company. Equinor now powers more than one million European homes with renewable wind power from four projects in the United Kingdom and Germany. Equinor commissioned the world’s first floating offshore wind farm last year, off the coast of Scotland, a technology essential to the development of offshore wind in many locations around the world, including the west coast of the US. Equinor is also developing offshore wind in Poland, as well as solar energy in Brazil and Argentina.