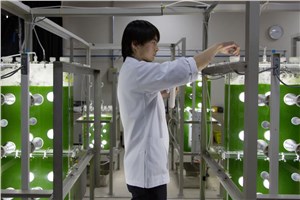 In a previous article - An Algal Biofuel Obituary - I discussed the overhyped biofuel companies in that space, and the failures of numerous start-ups that couldn't deliver on their promises, after hundreds of millions of dollars of private and public investments.

Following that article, I was contacted by a long-time acquaintance who took some exception to my characterization of the “death” of this industry. He points out that it actually thrives as an active and important R&D enterprise, supported by both private and public funds.

Dr. John Benemann, with a Ph.D. in Biochemistry from the University of California Berkeley, has worked on algae-related technologies for over 40 years. He is CEO of MicroBio Engineering Inc., a research and engineering consulting firm specializing in developing improved algal strains and cultivation processes for wastewater reclamation, animal feeds, higher value products and, yes, biofuels. He is also a director of the Algae Biomass Organization, the trade organization in this field.

Dr. Benemann himself has been a notable critic of this field, at least of some of the more outlandish claims put forth, starting about a dozen years ago when several venture capital-backed start-ups ignited the algal biofuel “bubble.” His justified fear at the time was that these would undermine an otherwise worthwhile long-term research effort. Indeed they did.

In a 2010 interview with Algae Industry Magazine, he was asked whether he was an algal biofuel pessimist. He replied: “I would think that I’m definitely on the optimist side, but I can’t quite bring myself to say that we are ready to produce algae biofuels. … I think it will take some time to do this…”

I spoke with Dr. Benemann about my column, and he sent me a response. He objected to my uncritically quoting from an email that I had received from someone complaining about waste of U.S. government monies on algae biofuels research. But his primary criticism was "Obituary" in the title, as most readers will think the field is dead.

For the record, I am well-aware that microalgae farming is already a commercially profitable industry for higher value nutraceuticals, food products, coloring agents, cosmetics, etc. Several years ago I toured the Cyanotech facility on the Kona coast of the Big Island. They produce spirulina and astaxanthin for the high-value food supplements market. Notably, their CEO, Dr. Gerald Cysewski, expressed to me his deep skepticism of many of the claims coming from the promoters in the algal biofuel space.

So, the existing algae industry, already producing high value products, wasn't the target of my column. Nor was research into producing fuel from algae, or from other biomass, such as for lignocellulosic ethanol, for that matter. I am a strong proponent of needed research and development. But many companies – the list is long – received both private investments and taxpayer dollars based on claims for algal biofuels that just weren't credible, and then failed. These were the targets of my column.

Dr. Benemann points to recent news stories and adverts by ExxonMobil, which project a 10,000 barrel per day algae oil production technology ready by 2025. ExxonMobil, with their partner Synthetic Genomics, is developing on a pilot plant for algal biofuels in the Imperial Valley, east of San Diego, California. And they have competition: Reliance Industries in India, owners of the largest refinery in the world, is already operating nearly 25 acres of ponds in an algal biofuels pilot plant. Also Shell Oil invested in an algae pilot plant in Hawaii and Petrobras in one in Brazil. Of course, the crystal balls of oil companies are likely no better than others, and the distance from here to profits still seems far.

Dr. Benemann argues, and I agree, that long-term R&D investments are needed if algal biofuels or low-cost commodities are ever going to be a commercial reality. There is a role for government funding, working together with private enterprise. Indeed, for the past ten years, Congress has directed the US Department of Energy, DOE, to invest $30 million a year specifically on algal biofuel R&D. This is now a vibrant research program ranging from genetics of algae to the engineering of cultivation, harvesting and processing technologies. Dozens of universities, small companies and national laboratories are participating and making steady progress.

Coming back to the failures of the companies in algal biofuels, the focus of my “Obituary,” Dr. Benemann provided further background: The ‘algal oil bubble’ started about a dozen years ago, when venture capital firms made major investments into several US algal biofuels start-ups that promised a great leap forward in technology. With the Obama “stimulus” package of 2009, DOE co-funded two pilot plants ($25 million each to Solazyme and Algenol) and a 100-acre demonstration plant ($50 million to Sapphire Energy). The need to spend these funds quickly led to the lack of real “due diligence”.

Although they failed in making good on their projections, and the venture investments were essentially written off, these projects actually survived, or were resurrected:

Thus, Dr. Benemann argues that these projects were not failures, even if biofuels were not produced.

I concluded by stating that “someone within the government should have done a better job of due diligence before dispensing tax dollars for these technologies.” Dr. Benemann agrees, but adds that this applies equally to private industry, and that in the specific cases highlighted above, government did as well as could be done, under the constraint of time and politics.

At the end of the day, while we may differ on the particulars, we agree that too much money went down the drain due to hype about algal biofuels, but that research and development is needed. In my opinion federal money devoted to such R&D should be framed by:

That said, algae biofuels research and development is alive and well. But, when will we start driving cars of flying airplanes on algae biofuels? There are no good crystal balls for this technology development.