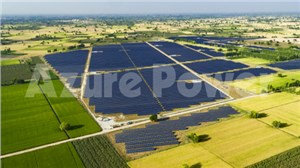 Azure Power, one of India’s leading independent solar power producers, announced that it has won a 130 MW solar power project which was recently auctioned by Maharashtra State Electricity Distribution Company Limited (MSEDCL), rated A by ICRA, a Moody’s company. MSEDCL supplies electricity to 22 million consumers in Maharashtra and was declared as a load shedding free state in December 2012.

Speaking on this occasion, Inderpreet Wadhwa, Founder, Chairman and Chief Executive Officer, Azure Power said, “We are pleased to announce our win in Maharashtra and with this, we continue to demonstrate our strong project development, engineering, and execution capabilities and are delighted to make this contribution towards realization of our Hon’ble Prime Minister’s commitment towards clean and green energy, through solar power generation.”

Azure Power has been among the most active participants in several solar power auctions since the launch of the solar power market in India and the majority of the Company’s portfolio are with customers that have some of the best credit ratings in India and are backed by the sovereign Government of India.