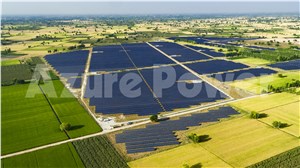 Azure Power (AZRE), a leading solar independent power producer in India, announced that it has won a cumulative capacity of 130 MWs at a blended tariff of INR 3.35 (~US 5.2 cents) per kWh, bringing the Company’s total portfolio to over 1,720 MWs. The win includes a 100 MWs utility scale project at the Pavagada solar park in Karnataka and a 30 MWs solar rooftop project with Indian Railways, the largest rail network in Asia, owned and operated by the Government of India through the Ministry of Railways.

The 100 MWs project was won in an auction conducted by Karnataka Renewable Energy Development Ltd. The solar plant will be set up at Pavagada Solar Park, one of the largest solar parks in the world. The solar park is being developed by Karnataka Solar Power Development Corporation Limited (KSPCL). Azure Power will supply power to the electricity supply companies of Karnataka (ESCOMs) for 25 years at a tariff of INR 2.93 (~US 4.6 cents) per kWh. This brings our portfolio in Karnataka to about 250MWs, which is one of the largest portfolios in the state.

Another 30 MWs was allocated by Indian Railways to Azure Power. Azure Roof Power will provide power for 25 years to various Indian Railway facilities across 12 states. Azure Power qualifies for a capital incentive from Indian Railways and the power will be sold at a weighted average levelized tariff of INR 4.74 (~US 7.5 cents) per kWh. With the new allocation of 30 MWs, Azure Power has become the largest supplier of solar power to Indian Railways with a cumulative awarded capacity of 76 MWs, which includes the 46 MWs of capacity currently in the portfolio.

Commenting on the occasion, Mr Inderpreet Wadhwa, Founder, Chairman and Chief Executive Officer, Azure Power said, “Azure Power offers tremendous value to our customers across various segments. We are pleased to expand our portfolio in Karnataka and with Indian Railways. With these wins, we have once again demonstrated our strong project development capabilities and are delighted to make this contribution towards realization of our Hon’ble Prime Minister’s commitment towards clean and green energy, through solar power generation.”